For your convenience and to improve our site, Plezi uses cookies for audience measurement and statistics. With your consent, PLEZI may also use advertising cookies.
Learn more... 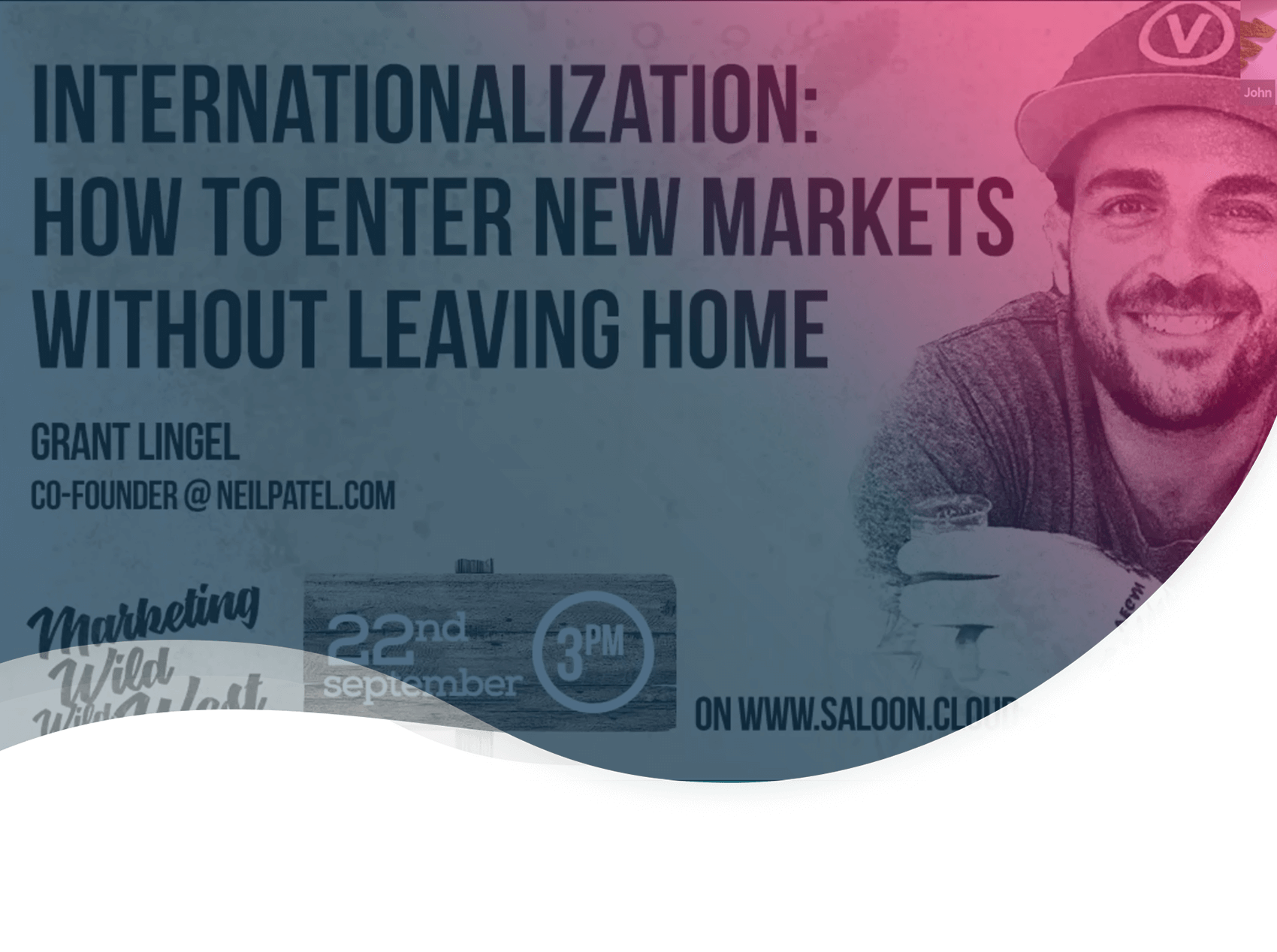 Internationalisation: how to enter new markets without ever leaving home, by Grant Lingel, from neilpatel.com

🌪 » Marketing Strategy » Internationalisation: how to enter new markets without ever leaving home, by Grant Lingel, from neilpatel.com

When Grant Lingel met Neil Patel, the latter was looking into deploying his brand in the Brazilian market and the former was a globetrotter eager to make his mark. Neil, at that time, was already a world-class marketing expert, entrepreneur and known for his in-depth advice on SEO and brand development. Grant, seeing the amazing opportunity laid out before him, packed his bags and headed to Brazil. 10 years later, Grant gave us his Marketing Wild Wild West talk on Saloon from his Brazilian balcony, overlooking the lush forest behind him.

More than just his desire to travel, he shared his vision of internationalisation: a way of thinking – integrating into a culture without necessarily using its own codes of behaviour, but understanding those into which one seeks to immerse oneself.

In his conference, he talked about the beginnings of Neil Patel’s brand in Brazil, his physical and digital marketing strategies and the brand strategy that he set up in order to, little by little, dominate a market that had not heard of Neil. Do you also want to see a bit that forest? The replay is available on Saloon. Otherwise, here is our summary.

Being bilingual is great and it will help you if you want to integrate into a market without a doubt, says Grant. However, it’s not enough. To do business in a new market, we have to integrate into a new culture and certain nuances, language techniques, unspoken words… can only be experienced locally -or by locals.

From a marketing point of view, it is not enough to only translate content in order to break into new markets. A good translation that does not comply with local codes will automatically work against you, and will even impact your search engine ranking.

In 2016, Neil Patel was already well known internationally and already had an audience in Brazil for his English content. It was while talking to passionate entrepreneurs at a conference in Belo Horizonte that he realised that this audience was asking for local content. 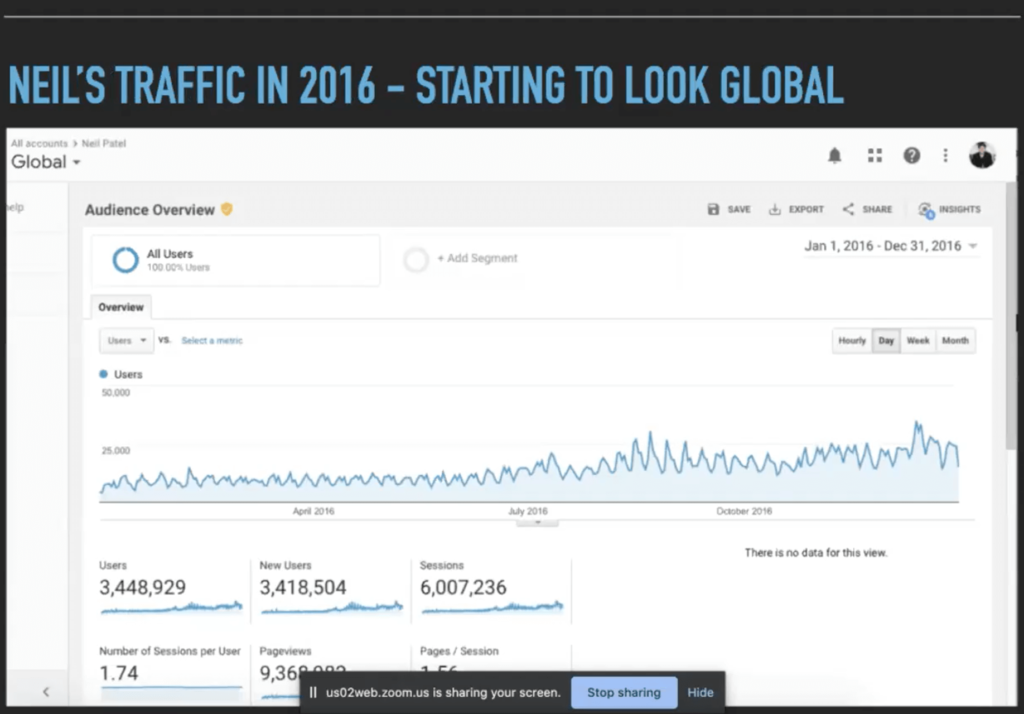 As can be seen above, the audience in Brazil was already there when Grant started implementing local content. However, after launching a real content strategy for Brasil in May 2016, traffic increased in a few months: it doubled in one year, reached 19 million views in 2019 and now counts 4 million visits… per month. 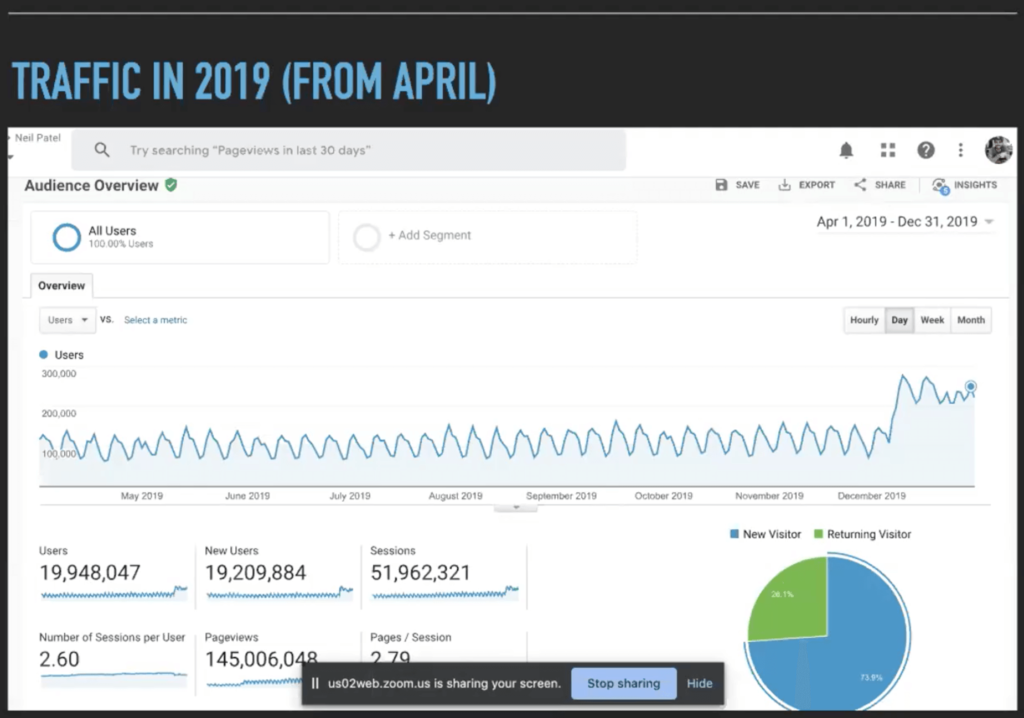 In 2019, the most popular article on Neil Patel’s blog in Brazil has been created specifically for this audience, in Portuguese. The team on site, led by Grant, noticed that the keyword “portfolio” was of interest to the Brazilian market but that the Portuguese content was rather poor. By writing an article with high added value, they were able to turn it into an article with an average of 300,000 views per year. Their local team conducts contextualised SEO research for the Brazilian market and helps them find relevant content. 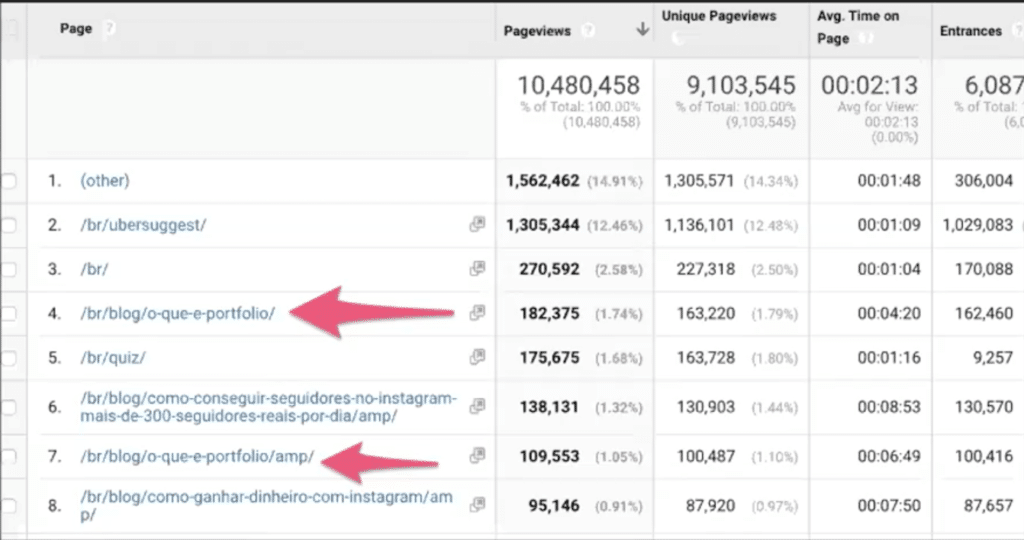 This approach allowed them to attract organic content, much better on the long run and that allowed them to fit naturally into local research results in their areas of expertise.

By contacting well-known media publishers and blogs in our field, you can start a conversation. If it is going well, why not offer them quality and original content in exchange for publication? This technique establishes our local presence and while capitalising on our expertise.

No need to systematically integrate backlinks to our site, says Grant (he even advises against doing it at all): the idea here is to establish your brand over the long term and make it known more than to gain traction.

Become a columnist in local media

By contacting well-known media publishers and blogs in our field, we can start a conversation. If it is going well, why not offer them quality and original content in exchange for publication? This technique establishes our local presence and while capitalising on our expertise.

No need to systematically integrate backlinks to our site, says Grant (he even advises against doing it at all): the idea here is to establish your brand over the long term and make it known more than to gain traction.

Offer them stories that ring different

By capitalising on our difference, it is easier to offer stories that are different from what local editors and journalists get pitched all day long. Our story is different from the local ones, and we can play on it. If we already have an international presence, we can also offer interviews of our team to local journalists, who will often be delighted to gain some international traction themselves.

By setting up interviews with well-known entrepreneurs or influencers in Brazil with Neil Patel, Grant and his team were able to advance their brand positioning. Local entrepreneurs are always interested in exchanging ideas with people from various backgrounds, known abroad or in other markets, as this gives them an opportunity to internationalise also!

It is possible, even from a distance! According to Grant, nothing is simpler than looking at what events are being organised in your target market and pitching high profiles from your company. Local events may find it more difficult to find speakers, and an international profile may be of interest to them.

By paying a few local celebrities or influencers on Instagram to post a picture of them with a sign asking “Who is Neil Patel” in Portuguese, they generated a local craze which got people curious. As Neil’s brand is his name, this campaign has allowed them to move up the search results quite quickly. Even though the craze died down, they kept a small audience, who, interested, came back to the blog afterwards. 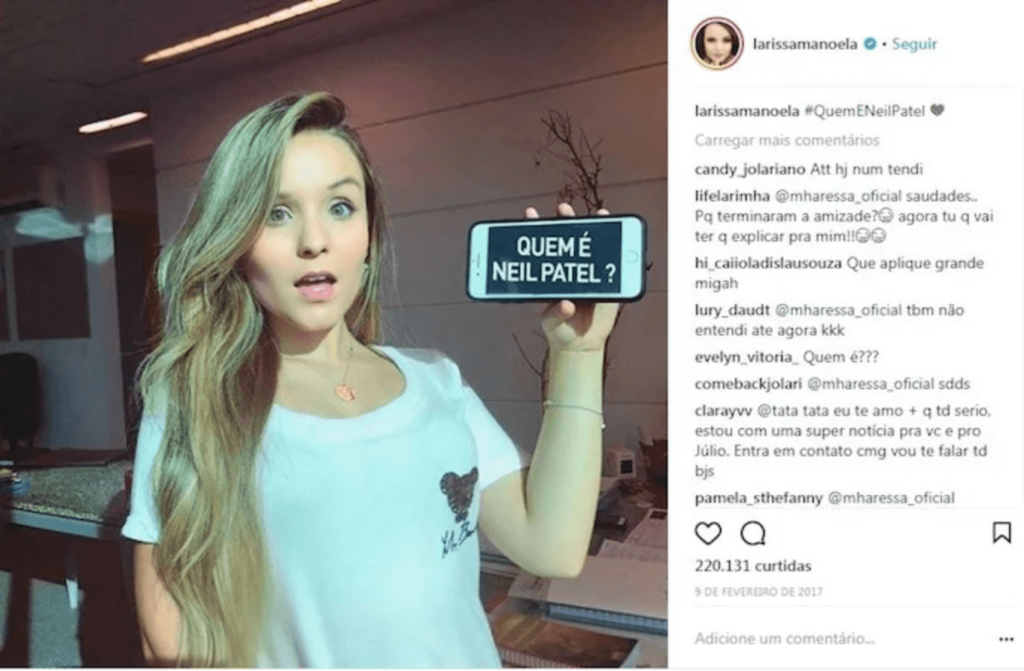 It is not possible to internationalise without putting some money on the table. If the results can be proportional to the investment, we can already go a long way by investing smartly.

The team, he tells us, doesn’t have to be very large and, initially, doesn’t require a physical office… but must operate from the country in question. The configuration of an ideal team, for him, is as follows:

If you find the gem, one person can take care of all these elements at the same time!

Rolling out in several markets must be done gradually, Grant tells us. If we have tremendous resources, we can consider launching several local teams at the same time, but only after we have tested our processes and strategies first.

Each market will have its own challenges and opportunities. By testing our processes, giving ourselves the opportunity to fail (but never to make the same mistake again) and building up our skills little by little, we will be able to excel in one, then two, then several markets …

Grant Lingel worked with a significant competitive advantage: Neil Patel himself. His brand, which was already well known internationally (and with English content), made it easier to enter the Brazilian market. However, his advice can be applied to BtoB. If there is only one thing to remember, it is that internationalisation… is above all a question of localisation. To see the Replay and get deeper with Grant Lingel’s detailed examples, go to Saloon!